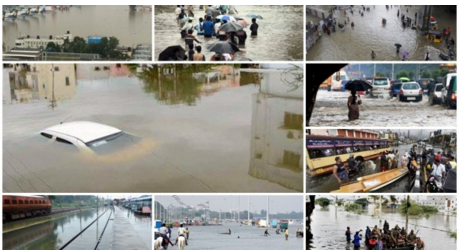 The flood in Chennai a city in southeast India is experiencing a major flood leaving over 650 people stranded. This mighty flood started in the evening of October 1,2015. It was a very calm day,kids went to school and came back,and the parents also went to work and came back. At about 4:30, however, the never-ending rain started, and the next day when the residents of Chennai got up, it was around 4 inches of rain. School was cancelled for 5 days. Imagine that! Those days the rain was going on and on. Then it stopped for a while about 2 days or so. After those 2 days there were several, continuous rain showers. Nobody could even get out! The citizens of Chennai were scared because they’d never experienced something like this. The last time they had a major flood was 1778,and that was almost 140 years from now! The city is under about 7 feet of rain and floodwater now. Chennai cannot take any more of this horrible rain.